I'm so glad it's Friday - aren't you? It's always nice to have a few days to catch up on all the things around the house that get neglected during a busy week. Not to mention the weekends are usually when I get some stamping time in! My weeks are so busy that I rarely have time to stamp in the evenings anymore, unfortunately. I'm sure many of you can relate to that, right? 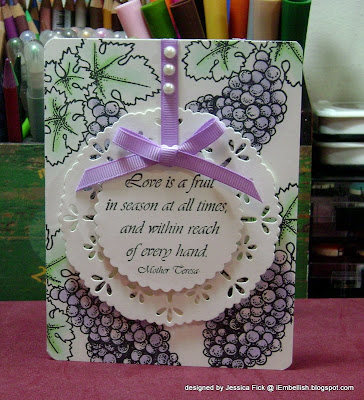 I LOVE GinaK's Pure Luxury Heavy base cardstock - and judging by how many hundreds of packages go out of our store each week, I'm not alone! I used the heavy base white cardstock on the cardbase as well as the Nestability dies you see on this card. The thickness of this cardstock really helps the die cut to keep its shape. 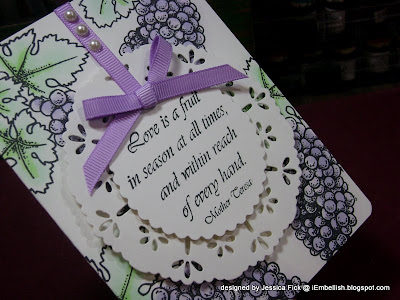 I stamped the images in Black memento inks and used my beloved Copics to color the grapes. It's a rather clean and simple card, but I really like how the white layers pop against the green and purples. 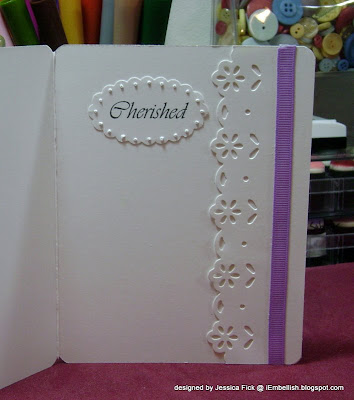 My next card uses a Nestability frame die cut that I've had for a while but finally got around to using. I don't know what I was waiting for - I LOVE it!! 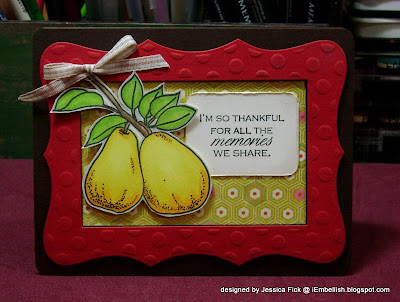 Isn't that fun? I used GinaK's Chocolate Chip and Rocket Red cardstocks as well as Basic Grey's Lemonade patterned paper for the inside mat. The images were colored with Copics and then cut out.

I like a thin white border around my cut out images because I think the white helps it to stand out... but I may be in the minority about that. I see a lot of people say they don't like the white borders when they cut their images out. Which way do you prefer? 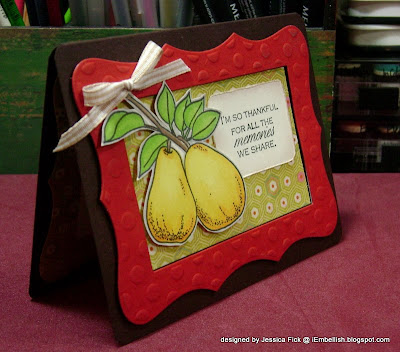 I wanted to share the photo above so you could better see the dimension this card has. I popped the frame up as well as the pears. It's hard to see in my photos, but I rubbed a little bit of Craft-T's Metallic copper rub-on paste on the embossed dots to highlight them a little more. It gives the embossing a nice shimmer. I also rubbed some paste around the cardstock front as well as the sentiment. 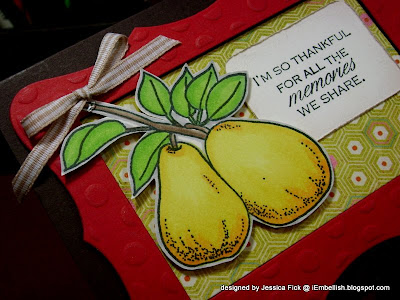 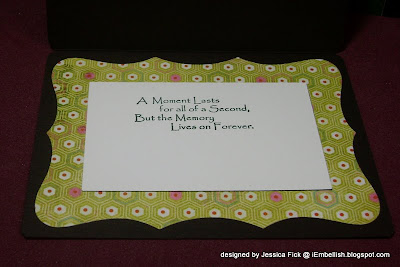 My last card is a super simple one to showcase these gorgeous apple images of Asela's along with this fun Quickutz embossing folder I recently bought... 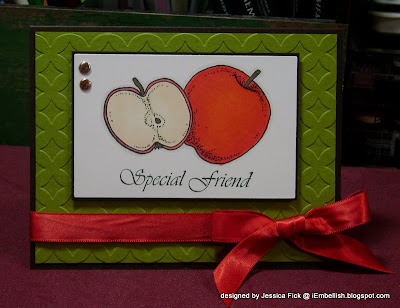 Isn't that folder fabulous? I stamped the images in Black Memento ink and colored with Copics. I would LOVE to take a Copic coloring class from Asela - or Theresa, for that matter - wouldn't you?

I have taught many Copic classes at Gina's store, but still LOVE to see other people's techniques and step by step instructions. I'm so glad that both Asela and Theresa take the time to show us some of their tricks and steps on their blogs. I don't take the time to do that because they are so much better at it than me! 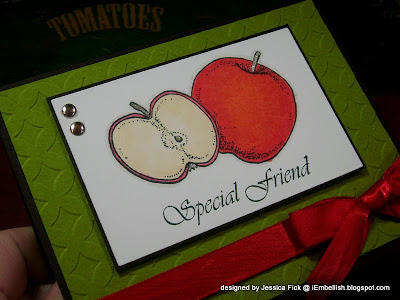 Another view of those juicy apples - can you see that I added a little bit of yellow Copic marker to the center? That's what I want Asela to teach me... how to do that gorgeous apple shading that she showed on her beautiful apple basket card HERE on her blog. This was my attempt at that - but I blended the colors out too much, I think. 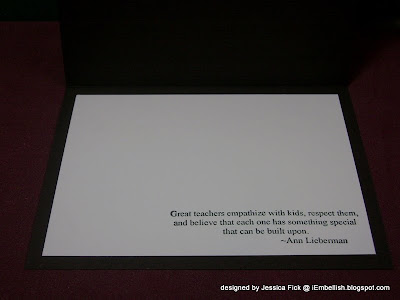 The sentiment is from Rupa's Back to School stamp set... another fun new GinaK Designs stamp set released last month.

For even more inspiration with the Fruitful Harvest stamp set, head over to Asela Hopkin's blog, the illustrator of this beautiful stamp set. She has also asked her friend Deb Felts to share a card with us tonight too!

Then, take the time to check out all the other GinaK Design Team Member's sharing projects tonight on their blogs:

Love your projects! And I adore the way you finished the inside of that first card! Stunning!

Jessica, your cards are all absolutely stunning! Wow, that top card, with all the punched elements, takes my breath!

Wow! So many lovely cards!

Your cards are just fantastic!!

Oh My Goodness these are beautiful. The card at the top is so different I LOVE it!

Ohh would you look at the bold colors!!! Just gorgeous in the framing!!! But that dainty, delicate first card just reaches out and grabs me!!!!!!

what beautiful eye candy. They are all fantastic...the first one is just stunning---love the inside too--so elegant!!! Great job! Have a fun (relaxing) weekend!

Wow, wow and wow! you're projects are all beautiful. Love how you think creatively out of the box! So inspirational

Wow, Jessica...what wonderful cards. You really have an outstanding eye for color and all of these cards are so very outstanding!

What beautiful cards Jessica! Love all of the detail and your Copic coloring is so pretty. Wish I lived closer so I could attend the classes you offer.

Very, very pretty. I especially like the pearled Cherish and the inside of that first card. You really showcased Asela's set so well.

The rocket red and chocolate chip made me squeal! I love it. Great job!

WOW Jessica, all your creations are amazing!!
THanks for the inspiration.
God bless
Giovana

Each one is stunning! you always inspire me to do the insides of my cards..and then I still don't...your pear card looks like it's in a picture frame! and yes, would love to take a Copics class from either one of them AND you!
beautiful work, as always :)
Linda

Every single one of your projects is gorgeous! I've been blessed to have had several of Asela's Copic classes, but I'd love to take one from you too!

I love all your cards. The first one with the grapes was great with the added white on top and pearls. The others had great color. They were beautiful!!!